It’s easy to appreciate beautiful Oriental rugs, but how much do you know about them? These gorgeous, hand-knitted carpets originated in Eastern countries, which is how they came to be called Oriental rugs. Persian rugs are famous traditional rugs that come from Iran, but there are many other types as well, from countries that include China, India, Turkey, Pakistan, Tibet, Nepal, and Russia. How did they come to the Western world, and what’s the historical significance behind these rugs?

Oriental rugs have been around since ancient days. In fact, some scientists believe that carpet weaving existed in Iran as early as 500 B.C., in the Achaemenian period. According to records kept during that time, the Achaemenian court of Cyrus the Great valued these rugs, and the tomb of Alexander II of Macedonia is draped in them. Elsewhere, Oriental rugs have also been valued for a long time. In China, they date back to at least the Sassanid period, which ran from 224-641 CE.

The cultural impact of these rugs is significant. The specific patterns, colors, and weave of Oriental rugs reflects the indigenous cultures behind them. Different weaving techniques can be traced to different geographical areas and nomadic tribes. Those tribes tended to create geometric patterns, while more urban areas typically produced rugs with floral designs. Some of the rugs were prayer rugs for different tribes, and others were used to document events like weddings or deaths, or concepts like grief, happiness, or strength. The rugs were made of organic material, woven of materials like silk or wool, dyed with natural substances like pomegranate or sumac, and expertly hand-knotted. The tradition of hand weaving from quality materials persists to this day. 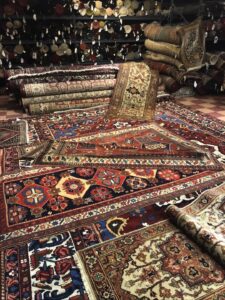 Oriental rugs made their way to Europe after trade routes were established with the Middle East. Once Iran began trading with the British, Dutch, French, and Portuguese, the elite members of European society became obsessed with these gorgeous rugs. In fact, they were revered as works of art and became a status symbol for European connoisseurs. In the Victorian era, the British were so enamored of these ornate floral living room rugs that mimicked their gardens that they began investing in Iran. That investment in the Persian rug industry led to more production and the demand continued to increase.

How much do people value Oriental rugs? The most expensive rug ever sold was an antique Persian carpet that was sold for $33 million in 2013 at a Sotheby’s auction. Because the craftsmanship of Persian rugs involves so much work and artistry, they’re highly treasured to this day.

If you’re looking for high-quality rugs near Memphis, TN, trust Taghavi’s Oriental Rugs. Since 1977, our family-owned and operated rug store has been providing exceptional quality rugs and reliable services to customers all over the world. Based in Memphis our store features a large inventory of hand-crafted Oriental rugs, some made by master weaver Ali Taghavi, others by respected rug weavers in other parts of the world. We also provide onsite rug cleaning and repair services, with experienced professionals doing all the work by hand. Contact us for a no-obligation estimate, check out our inventory of more than 5,000 oriental rugs for sale or talk to us about custom-made rugs.

Purchasing a Persian or Oriental rug is a big decision. The investment will impact your interior design for years and could even become a prized…

If you own an authentic Persian or Oriental rug, you probably plan to keep it in the family for generations. With the proper care, Oriental rugs can…

Read More
Back to the top